Last week we discussed planning a Disneyland vacation, the pros and cons of busy season vs slow season, the multitude of hotel choices, and how long one should go . For most people I highly recommend going when Disneyland is operating with everything open and all shows running, in other words when its busy (summer, Thanksgiving thru New Years or Spring Break weeks). And I highly recommend staying on property if your budget allows. If not, choose a Good Neighbor Hotel along Harbor Blvd that is within easy walking distance of Disneyland (like Howard Johnson Anahaim or Candy Cane Inn or Anaheim Plaza Inn if you are on a tighter budget). Unless you like sitting in stop and go traffic and having your first line that you wait in for the day be at the entrance to the parking garage. If that is the route you choose, I'm gonna apologize now. Just know that other families will already be in the park riding rides, taking pictures with Mickey, or eating breakfast while you are still attempting to find a parking spot and then waiting for the shuttle from the parking lot to the park. I also recommend going for more days rather than less. Its cheaper per day the longer you stay. You will get to see and do more, and you will feel more immersed in the Disney experience with all of its glorious details that are so easy to overlook.

Mornings are precious in Disneyland. They offer the quietest times in the park. Do everything you can during the planning stages of your vacation to insure you can get to Disneyland when it opens. Seriously, the early bird gets the worm! 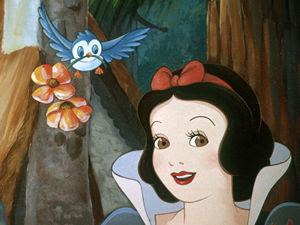 Now that we have the dates, the hotel and the tickets taken care of, we can discuss your actual touring plan. This is when we talk about things like rope drop, fast passes, dining reservations, how to navigate the park, and when to go see shows. Not to mention where to sit and how to get those good seats.

Sounds a little over whelming, huh? That's why we're doing this. To make it easier and give you the knowledge that you need for a successful trip.

We are now in Disneyland nice and early. Technically you are in the park before its officially open.
Perfect. See where the blue stars meet the yellow stars above? That is where the rope will be. When its time to open the park there will be a fun countdown and the rope will be dropped allowing you to enter the rest of the park. If you have people in your group that don't like crowds, but do like characters, this is an awesome opportunity to visit with select characters in the circle that is labeled Main Street USA. Then you can enter the park a touch later. This is all about a pleasant trip. If you like the excitement of those anxiously awaiting a fun filled day in Disneyland then do the rope drop. If you don't like crowds, visit characters with minimal lines. Its a win win either way.

Why are mornings not busier? Remember me mentioning that Disneyland is different from Disney World? The type of visitors in Disneyland are a little different too. Most people who visit Disneyland on any given day live fairly close, within a couple of hours drive. They don't tend to get to the parks early. They aren't on vacation, its their day off from work so they sleep in. Add to that dynamic, the people who are on vacation, but choose to sleep in any way. (Don't do it, seriously, its worth it) or they go to a sit down breakfast before going to the park. Again, don't do it! Eat in your room, or as you walk to the park or in the park itself. Mornings are the best time in the park. I can't stress this enough.

So, you are in the park, what next?

Grab a fast pass! A what?

Ok, Fastpass. Select rides in Disneyland offer a special ticketing system. Anybody can use this system. All you need is the ticket you use to get into the park. It doesn't cost anything and it works with all tickets, one day, multi day and Annual Passes.

Disclaimer: The following info is valid as of April 2012. The Disneyland Resort Fast Pass system is ever changing.


These rides all have Fast Pass machines nearby (they are well marked) that you put your entrance ticket into  (you get it back) and it gives you an appointment card for the ride. Only so many appointments are available for each time slot, so the later in the day you get a FP, the later the appointment will be for. To make life easier, send one person with the tickets from everybody in your group to go get the FP for everybody. We call this our FP Runner. Sounds important huh? Saves time and unnecessary walking. Its allowed, don't worry.


Keep in mind that you can get another FP for the same ride or a different one when the appointment is up or two hours later, whichever comes first.

This is an Indiana Jones Past Pass. See how it says your next FP is available at 9:40? In the morning it will almost always match the appointment time on the FP. Later in the day, it is likely to give you a time two hours after you get the FP.

Another neat thing with FP is that you don't have to return during that appointment window. This is a unique little loop hole that Disneyland currently allows. Its a silent policy, so to speak. But it may change as we head into the summer. Email me before your trip and I will let you know what the current policy is at that time. For now though, you can save that FP for after dinner when its busy, lines are long and you want to enjoy the park with less hassle. This is totally legit! For now...Keep in mind that the Disney employee(CM) in charge of checking these could technically turn you away after the end time of the appointment window, but I have never had it happen. NEVER.

So, with the knowledge that Disney doesn't enforce the end of the appointment window, you can now have your FP runner join you in line at the ride you are going to ride.

In Disneyland I recommend getting FP in this order...
Star Tours, Space Mountain, Indiana Jones, Splash Mountain, Big Thunder Mtn RR, and Autopia.  Autopia is the slowest FP line in the park and only worth getting a FP for if you are doing  Disneyland in one day. Otherwise use the regular line during one of your mornings that you were smart enough to show up for rope drop for! Yeah early morning benefits!!!! You can get Roger Rabbit anytime since it isn't connected to the other rides and isn't effected by times relating to other FPs. Its also not a super busy ride most days, so it does not tend to run out of FPs during the day.

While we are discussing FPs , we need to touch on DCA too. The two parks' FP systems are not connected to each other. They don't talk. So you can hold FP from both parks at the same time. You can send a FP Runner to DCA to with everyone's tickets to begin collecting FP there.

In DCA I recommend this order...
Soarin' Over California, Screamin', Grizzly River Run, and Tower of Terror

Most day DCA opens at 10am.

This will all change when Carsland opens in June. More rides will have FP, Disney is likely to make changes to the silent rules of FP, DCA will open earlier, and it will generally be busier. I will do an update when we find out what they are going to do. Until then, we are gonna go with the above info!

Ok, you have your first FP, or sent a runner...what ride am I going to do?

This is a very personal choice. Each morning is different for us. One morning we dedicate to Fantasyland and the Matterhorn. Its just too busy (and no FP) during the day. One morning would go to Tomorrowland and Autopia. Yet another morning would be Finding Nemo (again no FP) and then over to DCA for their rope drop. If you have a Mickey fan I recommend using one morning to go to Toon Town when it opens (an hour after the rest of the park) and get in line for Mickey's House and pics with him in his studio.

As you put together your touring plan for your trip, try to keep in mind how the majority of visitors move through the park. Fantasyland always gets busy quickly. Families with small children descend in droves fairly early in the day. By lunch you want to be out of there unless you have little ones that will want to spend a huge part of their day there. Tomorrowland also gets busy fast. Two of the park's biggest attractions are here...Space Mtn and Star Tours. Plus its bordered by the Matterhorn and Finding Nemo, both of which get busy fairly early. These are also generally the first rides to run out of FPs. Next would be Adventureland with Indiana Jones. Then The New Orleans Square rides of Pirates of the Caribbean and Haunted Mansion, followed by Splash Mtn in Critter Country and BTMRR in Frontierland.

This true EXCEPT when Haunted Mansion has its Nightmare Before Christmas clothes on from the end of September until after New Years. During that time HM offers FP and you will want to get to it early. That ride has a cult following amongst Disney fans and gets insane. Its worth the effort though!

Are you seeing why its so important to get there early in the morning. On a good day, when we are all up for it, we can ride all the major Fantasyland rides, the Matterhorn, Star Tours, Space Mtn, Indiana Jones, Pirates and Haunted Mansion before lunch. Plus have FPs for Star Tours, Space, and Indy for later in the day.

Ok, so now its lunch time. You weren't quite as gung ho as we are, but you did manage to ride a few rides and get a couple of FPs. Its okay, its not a competition. We are only crazy on one morning of each trip, usually we are much more laid back.

See you next week!