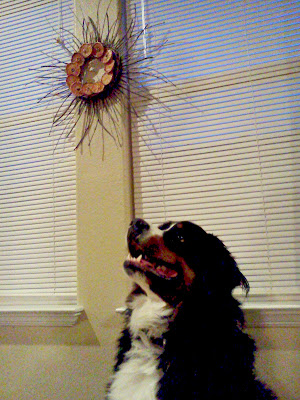 I assembled the starburst wreath thingy mabob up there last night. I had been trimming some shrubbery back and liked the texture of the sticks. A chore turned into a mini craft project. As you can glimpse thru my blinds, it was getting dark when I finished and snapped a quick pic. I will post a short tutorial later today. But first, I have to brag about the other part of the various assemblies... 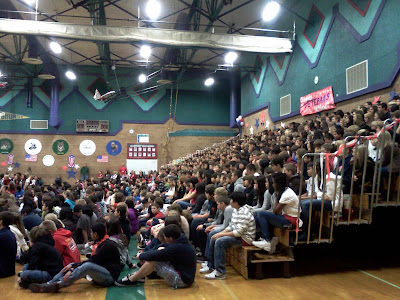 How do you keep roughly 800 11 to 13 year olds enthralled and QUIET for an hour? You simply inform them that  they are in an assembly to honor our Veterans. Really?! Yep, they were reminded that this was a serious gathering and acted accordingly. These kids are awesome! 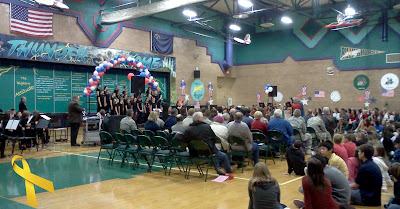 Miss H performed with her Advanced choir back there under the balloon arch. To the right of them, seated, is the Golden Strings and to the left is Concert Band. These three groups comprise our top notch and talented group of advanced musicians at my daughter's school. Miss K also had the pleasure of going through this program. We chose where we were going to live in the Truckee Meadows based upon the school's performing arts programs.The performers' hard work paid off. They all performed flawlessly and with dignity for the 40 or so Vets seated in the middle. There was a guest speaker from the US Army, active duty, that commented how the choir had touched his heart and nearly made him cry with their performance of American Tears. What a compliment. Something else? He was describing the camaraderie of the military and asked the kids how many played sports. Nearly every hand was raised. We really are doing a wonderful job of keeping our kids involved. The camaraderie of their team mates in sports and their fellow musicians in music will last a life time. I love these kids and truly appreciate the benefits of living in this great country. I thank every man and woman that has given so much to keep our nation safe so that the next generation can benefit from the better world they create through their sacrifices. I also hope that all of these young men and women will see the honor of serving their country and continue to support past, present and future military veterans in their endeavors to continue to provide a safe home for the generations that will follow.

We remember each of them, some with names and faces close to our hearts, others from afar having never known them. We honor them as individuals as well as units within the branches of their chosen Armed Force. We thank them with heartfelt admiration and compassion for not only their dedication but also the sacrifices of their loved ones left at home among us.